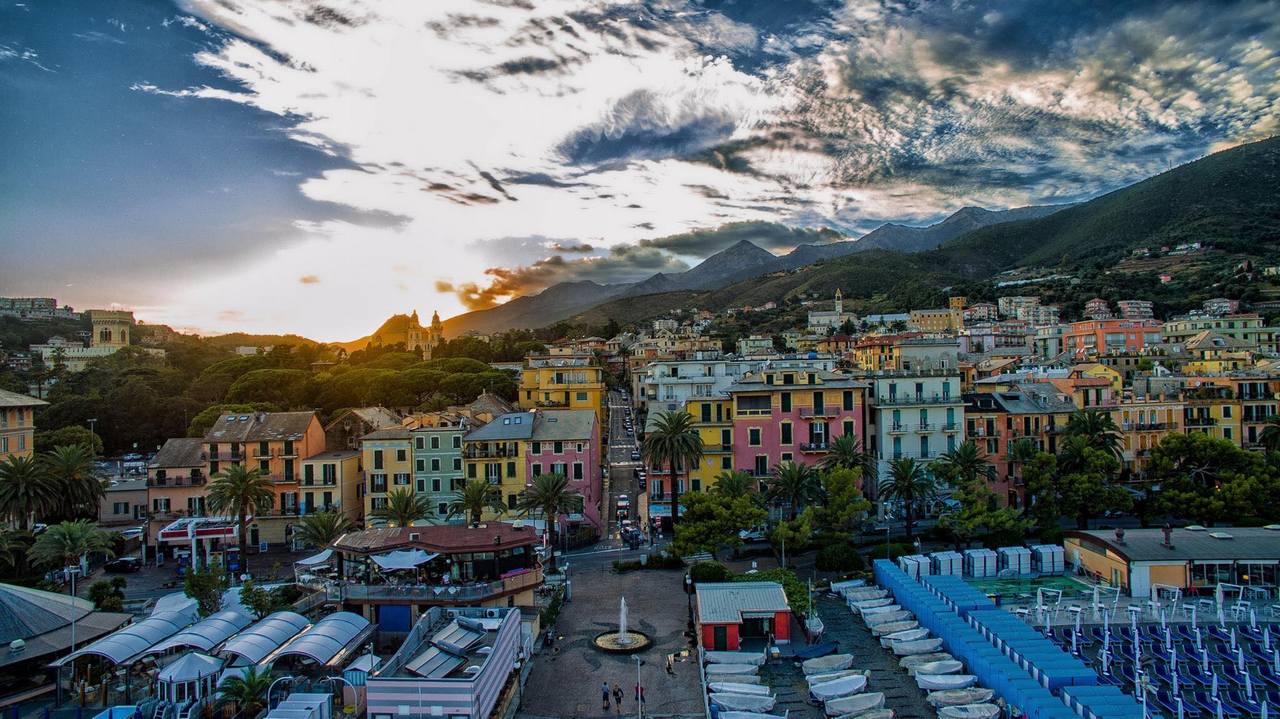 Arenzano is located in West Ligurian Riviera and, thanks to enviable climate and a wonderful sea, it’s a popular tourist attraction all year long. The historic centre, wholly pedestrian, is marked out by the traditional caruggi (ligurian alley), climbing from the sea promenade to the Parish Church. This is  the social and commercial  hub  of the town, among shops, restaurants and small ancient places. Here, don’t forget  to taste Ligurian  focaccia, the culinary flag of Ligurian food tradition. Ancient seafaring village, Arenzano has gradually opened to tourist reception. Today it is the ideal destination for sea lovers for its crystal seawater, the wonderful villas and their historic parks, a tourist harbour and a submarine scuba sport place.

The Carmelite Sanctuary of Prague Infant Jesus dominates the town up from the hill. The Church is a worldwide worship  location whom the town of Arenzano is consecrated since 2001.

The close inland is set almost entirely  inside Natural Regional Beigua Park (UNESCO Global Geopark with an overall width of 39.230 hectares), where it is possible hiking on a 500 km track- net. Here You can admire and appreciate an extraordinary environ rich in history and culture. In this suggestive location takes place our Mare e Monti International Walk, unmissable date for  open air walk  lovers.

Sightseeing around the area: 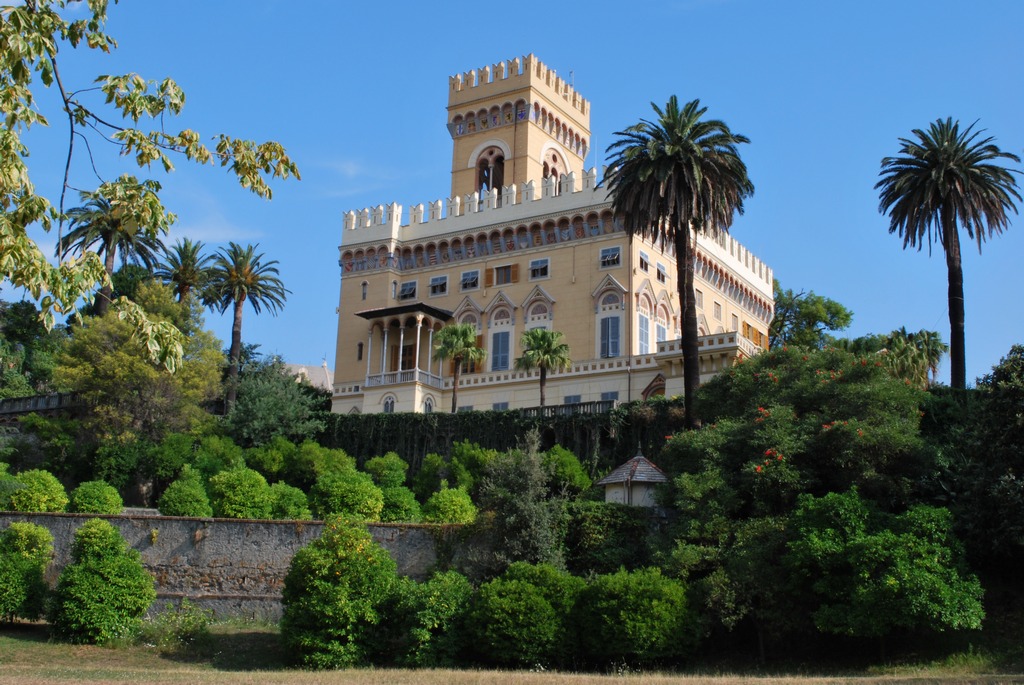 In XIVth  century, the noble Pallavicino Family bought a wide plot of land  in Arenzano and built his villa, adding a previous medieval tower. At the beginning of 1800, the vegetable gardens were transformed in an English style park,  on a draft by Ippolito Cremon, a Swiss architect. Today, Villa Negrotto Cambiaso is open to public and the castle is the  headquarter of Municipality. Here, Your gaze is immediately caught by the wonderful liberty style glasshouse, which still keeps part of its ancient beauty. It was built by wish of the Marquise Matilde Negrotto Cambiaso  on a draft by Lamberto Cusani and it was inaugurated in 1931. Arenzano Municipality organizes on springs, the event Florarte, a painting exhibition together with smart floral arrangements. Starting Your tour from the glasshouse, it is possible to visit the garden, made by architect Luigi Rovelli. In 1880 Rovelli refurbished the villa giving it the present aspect of a castle surrounded by a park with artificial lakes, books, waterfalls and lots of relics. 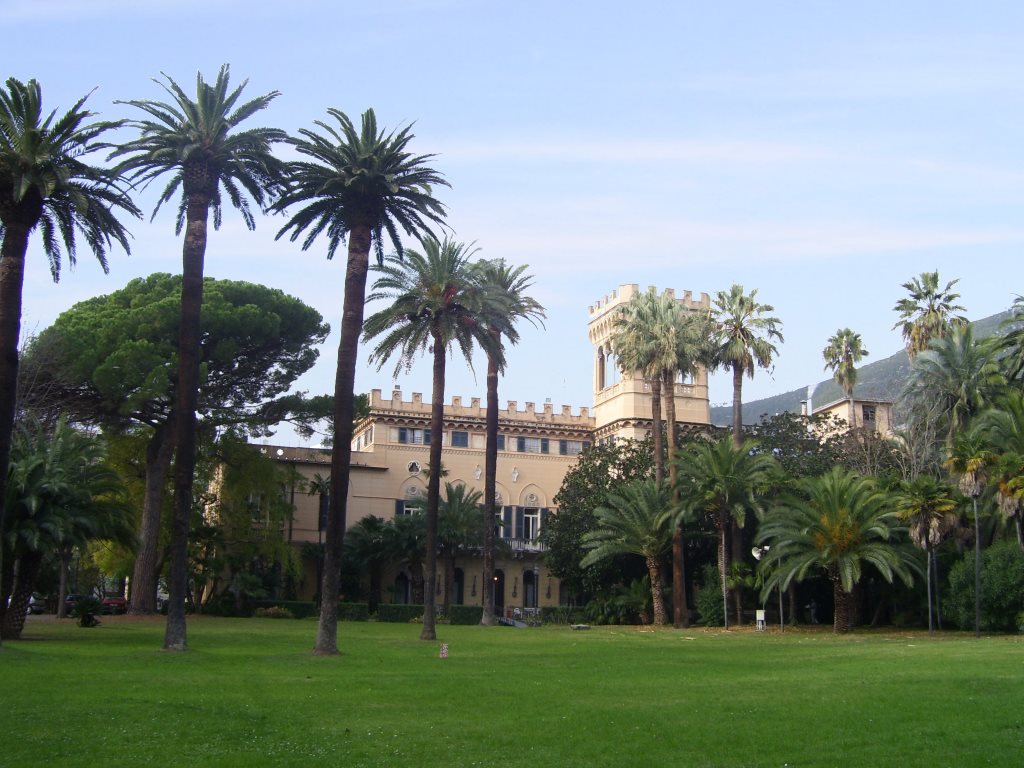 The building, with a large park, was property of Grimaldi family until 1749. It was then bought in 1849 by the rich Figoli family, business owners from Genoa. Eugenio Figoli, after the marriage with Countess Alice des Geneys, decided to live there and worked a lot to give to the villa and the gardens its current aspect. The restoration was entrusted to the young architect Luigi Rovelli who in 1872 started here his brilliant career. Rovelli rehashed the building and the garden according to that period trend that preferred the medieval style with small towers, crenellation, arches and geometric adornments. Many evergreen trees and palms were planted, creating an original sea garden with beautiful alleys. The particular gatehouse on the seaside was designed by Alfredo D’Andrade, a famous architect from Portugal. Among the famous guests coming to Arenzano to visit Villa Figoli, there was the Nobel Prize poet Giosuè Carducci. He wrote on the occasion a poem which You can still read on the façade of Palazzo Sant’Antonio, in very centre of Arenzano and today office of the public library. When Count Eugenio died, Villa Figoli was inherited by his two daughters that. after II World War donated it to the Alessandria Tuberculosis Provincial Fund. Later it was converted in sea resort for ill children and, in 2012 the Municipality Arenzano bought it for its citizenry. With the opening on 11th November 2016, the park has been opened  to the public, while the villa hosts a high performing School of Merchant Navy. The ground floor however will be available for institutional and cultural activities. 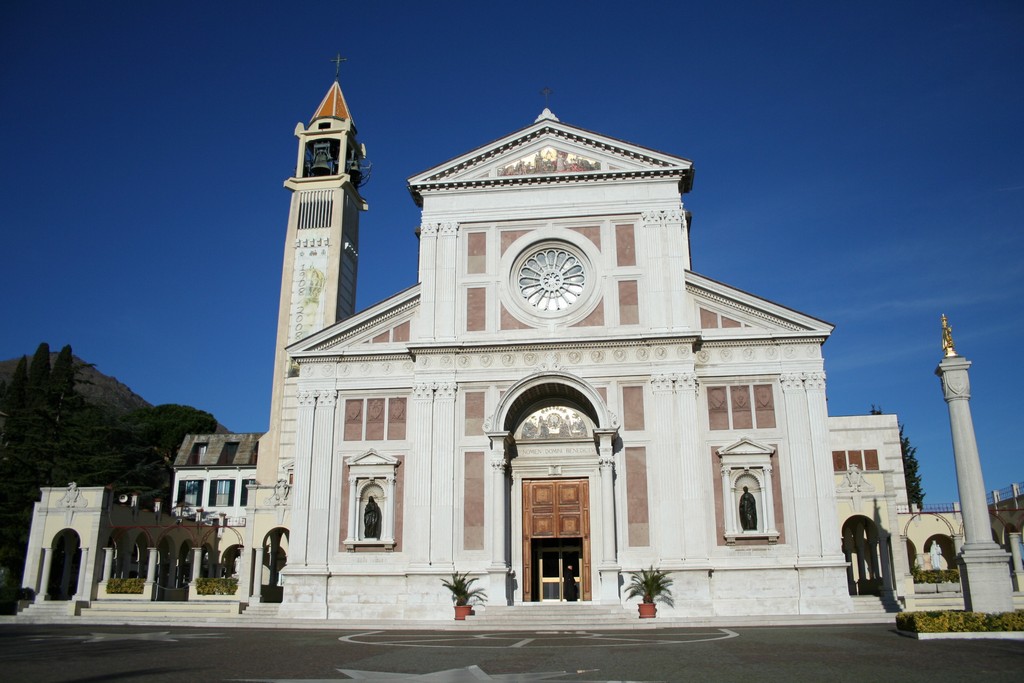 The devotion to the statue of Baby Jesus dates to 1600 in Prague and in 1889 Father Leopoldo Beccaro chose Arenzano as a linking point in the walk among the convents of  Genoa and the retreat in Deserto-Varazze, dedicating the new home to Sainte Teresa of Jesus. On 25th September 1900 Father Giovanni della Croce put a small painting representing Baby Jesus under statue of Our Lady of Mount Carmel in the little church of convent. The painting was soon replaced with a statue, gift from Marquise Delfina Gavotti. In 1904 it was started the building  of a larger church, opened four years later. The confraternity of Holy Baby Jesus was born and the sanctuary was devoted in 1928   , receiving the title of ” lesser cathedral”. In 1962 the church was expanded again. The church and the surrounding area became more functional to welcome the great number of pilgrims and visitors. Many famous artists contributed in the decoration of the Sanctuary with the most different techniques. Today it is possible to admire inside the church, the frescoes by Renzo Bongiglio, the majolicas by Angelo Biancini, the statue by Guido Galletti, the glass windows by Alfonso Leoni  and the ceramics by Eliseo Salino. Presently the devotion to Baby Jesus of Prague, spread throughout the world, has in the sanctuary of Arenzano its most universal and lively centre. 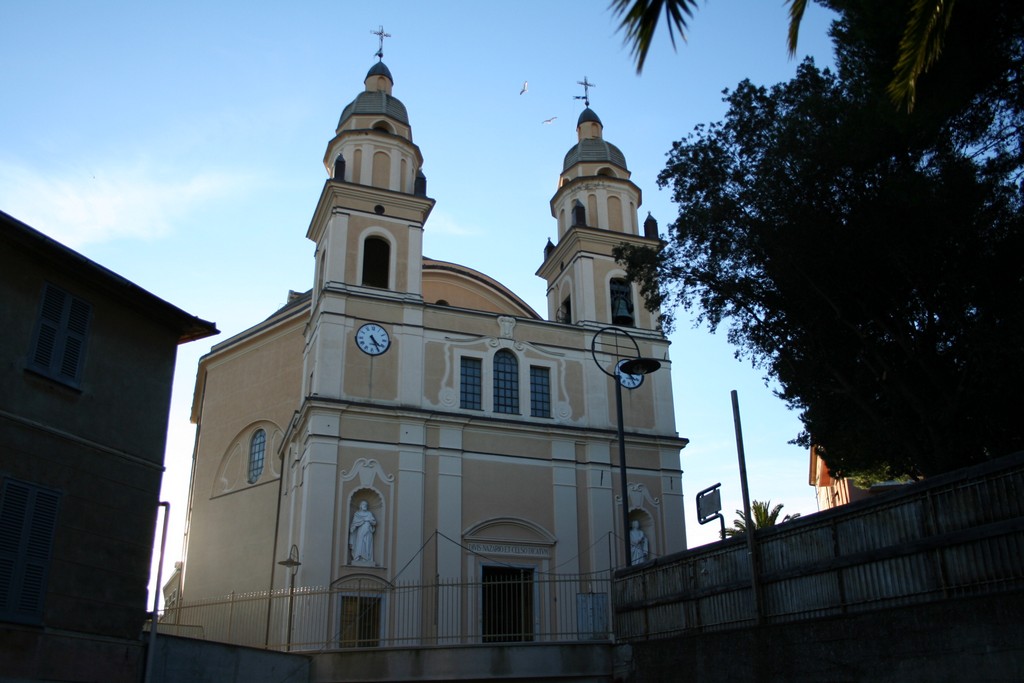 The first document about the church dates 6th June 1198. The building was refurbished for the first time in 1349 with an important widening of the church surface. Two centuries later (1545-1548) the church  is extended again in the backyard and a new belfry is erected; the new church is consecrated on 11th September 1594 by Alessandro Centurione, Archbishop of Genoa. Devoted to the martyrs Nazario and Celso, it becomes parish church and vicariate in 1630. In 1691 was planned another renovation which failed because of lack of funds. However in 1703 the church was modified again according the baroque style. The work ended in 1717 and the new parish church with two belfry (one on each side), was consecrated for the second time in 1771. The  building was seriously damaged during II World War after the strong bombing on 14th august 1944. The whole roof, the frescoed vault, the polychrome floor and some leading structure were completely destroyed. The works of reconstruction started in 1946 with the aim to recover the original baroque building. On 16th may 1948 was completed the roof, while the brick oval vault, with the original frescoes, was renovated some years later. Inside the church there are eight side marble altars. On the main altar, dominated by a crucified Christ by the well- known sculptor Anton Maria Maragliano, are kept the relics of Nazario and Celso, the Patron Saints of Arenzano. The vault is a work by Francesco Semino (1866) and draws the Ascension, while the underlying square illustrations, represent episodes of Life of Jesus: The external ocher colour has been renewed in 1990 together with the courtyard made with typical  Ligurian black and white pebble stones (“risseu” in ancient dialect), 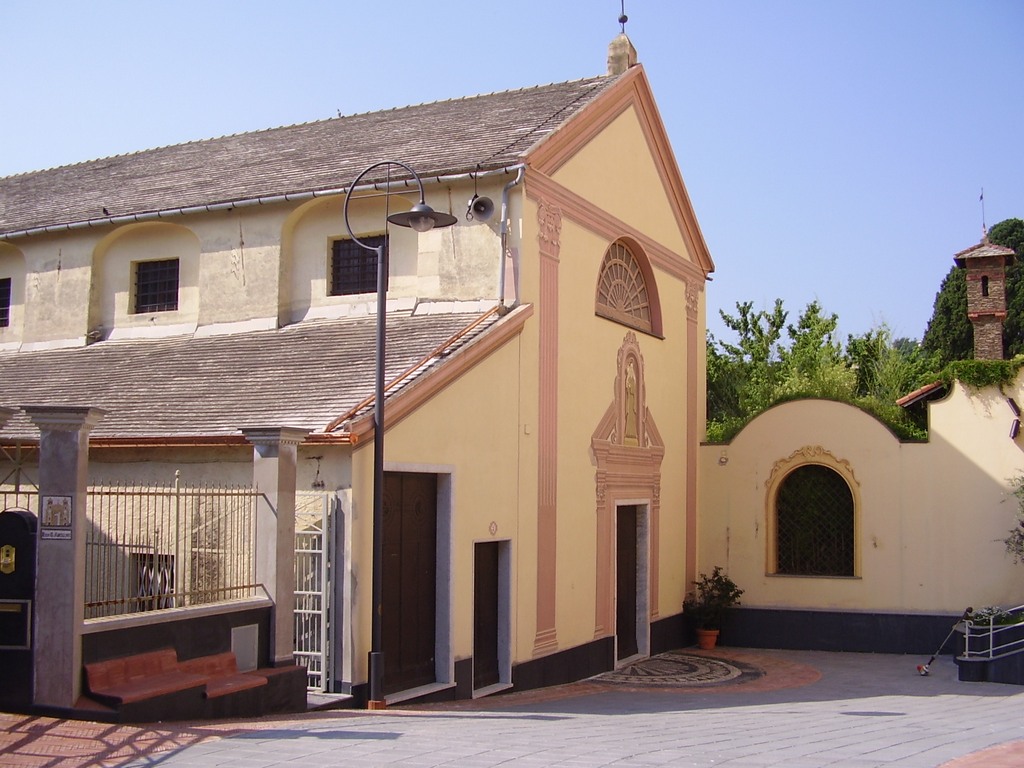 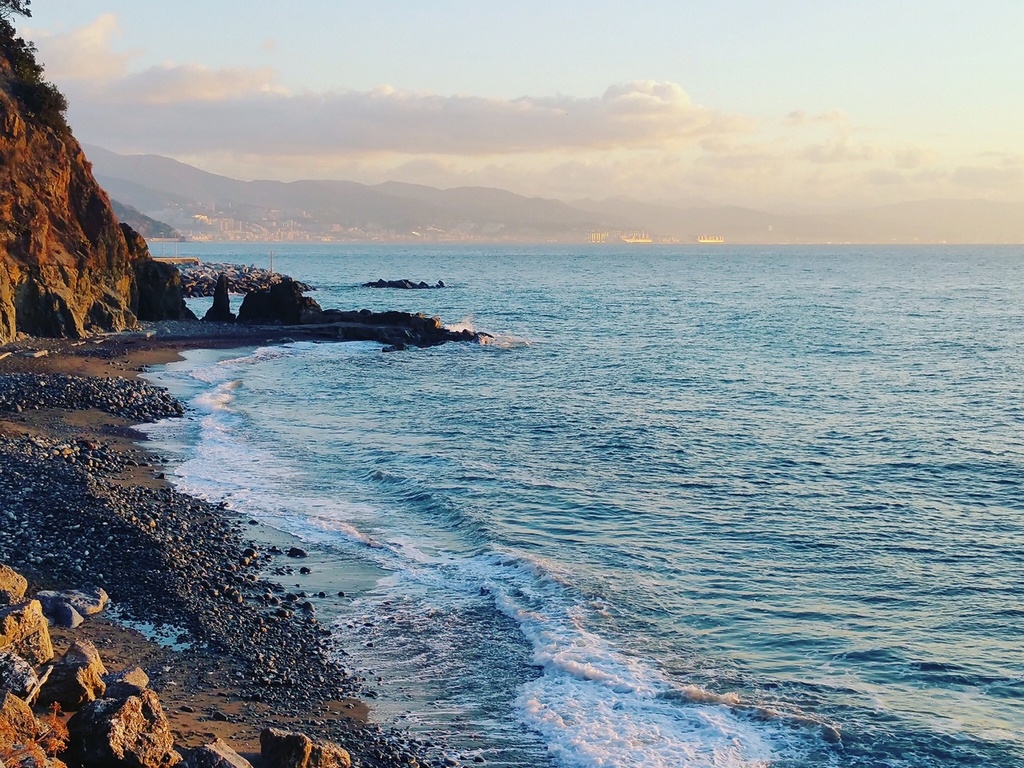 From Arenzano tourist Harbour starts Lungomare De André. The promenade, built over the old railway track interchanges among old train galleries, well lighted and made safe and open air stretches, characterized by the typical West Ligurian cliffs  overlooking the sea, with breath-taking views. Entitled to the great song-writer from Genoa, the boardwalk arrives to the beginning of the town of Cogoleto, where it’s possible walking towards Varazze. The promenade is pedestrian with a cycle lane. In the area facing Marina Grande, the great wall, running along the walk , has been recently decorated by volunteer street artists, with murals inspired to the famous songs by the departed singer. On this distance develop the coastal tracks of Mare e Monti Walk.